Our policies include our independently rated 5 star COVID-19 cover, to help you decide if this cover is suitable for your needs please view our dedicated Coronavirus Page which explains how your cover applies in a number of circumstances.

While we recommend you read our Coronavirus Page to understand in more detail the cover we include as standard we need to make you aware of the following:

Please note that all cover noted above is subject to terms and conditions. 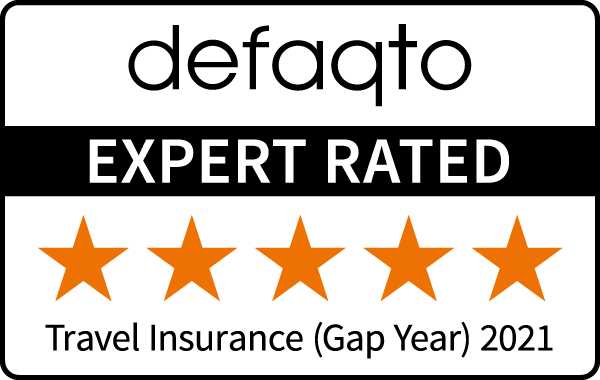 Our policies cover a wide range of Coronavirus risks including you being unable to travel due to contracting Coronavirus (either prior to travel or by being denied boarding at the airport), becoming ill with Coronavirus while abroad or needing to return home early due to a close relative passing away from Coronavirus. Please click here to view examples of what is covered by our policies as standard. Terms and conditions apply.

The Outbacker Travel Insurance product range has been designed to reduce the price of long haul and backpackers travel insurance without cutting down on the cover. Our specialised, flexible travel insurance will protect you whilst working or travelling abroad, wherever you are in the world.

Our policies all include over 100 sports and activities as standard

Medical expenses cover up to £10 million outside the UK

All Policies include end supplier failure as standard
Outbacker Travel Insurance policies do not cover ANY pre-existing medical conditions *We exclude work involving the lifting or carrying of heavy items in excess of 25Kg, work at a higher level than two storeys or any form of work underground. Please see the policy wording for further information.

Working Holidays* and a Return Trip to the UK
Cover up to 230 Sports and Activities
Safe & Secure Online Booking
Instant Online Policy Delivery
24 Hour, 365 Days Emergency Assistance
Over £40,000 raised for Doctors Without Borders